You are: Home » Australian coins » Articles » Wildlife designs on the decimal coinage

Wildlife designs on the decimal coinage

The idea of a decimal currency system really began in 1958. Prime Minister Robert Menzies was elected promising to investigate its possibilities. New designs were needed for the 1, 2, 5, 10 , 20 and 50 cents denominations. The Governement wanted unique australian themes as well as artistic reverse designs. With the help of a group of selected people, Stuart Devlin was chosen to produce designs based on australian wildlife with big numeral numbers representing the denomination.

To replace pre-decimal coins circulating in Australia at the time, 1 billion decimal coins was required and the new Royal Australian Mint was built in Canberra and opened on February 22, 1965 to achieve it. The first official decimal circulating coins produced at the Canberra, London, Perth and Melbourne mints and showing the new designs were released on February 14, 1966.

Also called flying mouse and flying squirrel, the feathertail glider is a species of marsupial native to eastern Australia. It is the world's smallest gliding mammal and is named for its long feather-shaped tail. 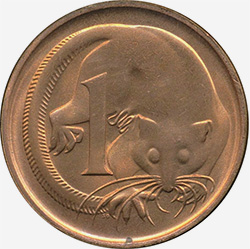 Also called frilled dragon, the frilled-necked lizard is a species of lizard endemic to northern Australia and southern New Guinea and primarily inhabits humid climates such as those in the tropical savannah woodlands. 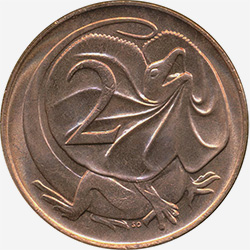 Also called spiny anteaters, echidnas are the only living mammals that lay eggs and live in Australia and New Guinea. The echidnas are named after Echidna, a creature from Greek mythology who was half-woman, half-snake, as the animal was perceived to have qualities of both mammals and reptiles. 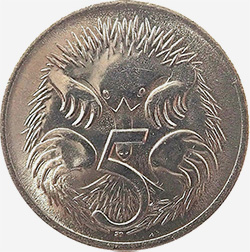 Lyrebirds are most notable for their superb ability to mimic natural and artificial sounds from their environment, and the striking beauty of the male bird's huge tail when it is fanned out in courtship display. Lyrebirds have unique plumes of neutral-coloured tailfeathers and are among Australia's best-known native birds. 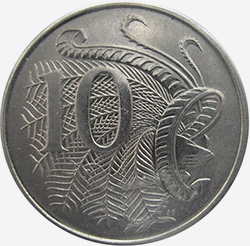 Like the four species of echidna, the platypus is one of the five extant species of monotremes, the only mammals that lay eggs instead of giving birth to live young. The platypus is the animal emblem of the state of New South Wales. Until the early 20th century humans hunted the platypus for its fur, but it is now protected throughout its range. 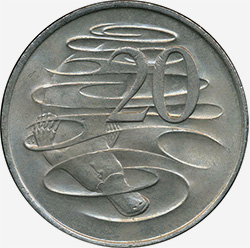 Kangaroos have large, powerful hind legs, large feet adapted for leaping, a long muscular tail for balance, and a small head. Like most marsupials, female kangaroos have a pouch called a marsupium in which joeys complete postnatal development.

The emu is the second-largest living bird by height, after its ratite relative, the ostrich. The emu's range covers most of mainland Australia. 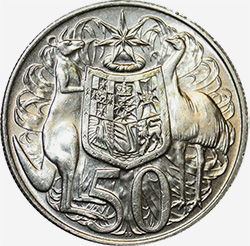 To replace short living 1 dollar and 2 dollars decimal banknotes, aluminum-bronze coins of these denominations were introduced in 1984 (1 dollar) and 1988 (2 dollar). The early designs chosen were a group of kangaroos for the dollar coin and a bust of an Aborigine for the 2 dollar one.