Including the sale of a near-million dollar coin, here's the list of most expensive Australian certified coins that sold this year so far.

This very rare coin sold in Dallas in March 25. Only 2 exist in private hands. The present coin is the Dangar specimen, sold by Spink to John Jay Pittman for a mere $700 USD in 1953, and residing in his collection for over four decades thereafter until it was last sold by Akers in the late 1990s for $103,50 USD.

The other specimen in private hands stems from the Murdoch (1903) and Whetmore (1943) collections, later auctioned in 1979 and subsequently again as part of the Sharps Pixley Collection, where it realized an impressive $81,000 AUD at the time. 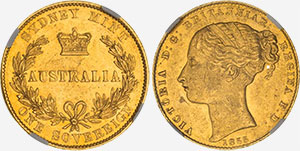 One of the rarest Australian sovereign to find in Mint State condition.

The economy of the colony of New South Wales was plagued by a lack of currency during its early years. Governor Lachlan Macquarie attempted to remedy this by importing 40,000 silver Spanish eight-reale pieces. By having the centres stamped out of the coins, Macquarie distinguished them as belonging to the colony of New South Wales and prevented them from going straight out again. In doing so, he created the first currency minted in Australia. Read more »

Another Dump (fifteen pence) was sold by Noble Numismatics VF-35 NGC and sold for $35,000 in September. 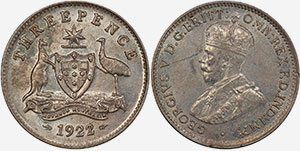 This 1857 Sovereign coin was sold by Stack's Bowser on January 15. First date of this type 2 gold series. Single finest graded of the date at PCGS.

With a very low mintage of 100, this Crown from Fenton Collection sold in January. Single finest certified at present between NGC and PCGS combined. A PR-64 example, brought $24,360 when it came to auction in January 2020. 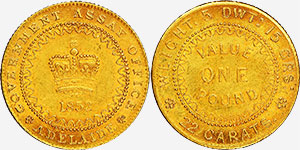 Because of the tremendous shortage of coins at that time in Australia and while gold dust and nuggets were in ample supply, it was decided to create one pound coins as a way to convert that gold into circulating currency. But the government of South Australia, didn't wait for Royal assent and England approval, saying that the Assay Office was not a legal entity and should not be striking the coins, before producing a short quantity of these one pound gold coins.

This MS-61 one sold in January and another one (AU-58 NGC) sold in August for around the same price.

The Australian Government wanted to replace the circulating Half Penny and Penny in 1919. Trial square patterns, the Kookaburra, were minted by the Royal Mint in London and specimens in Royal Mint in Melbourne. Because there awkward shape and low weight revealing technical difficulties it was decided to not put them into circulation.

Another PCGS solo-finest sold by Noble Numismatics, in March.

Internation Auction Galleries sold a SP-66 one (represented here) in June and marked as a specimen even if PCGS certified it as MS-66. Only only a handful of specimen examples are known. 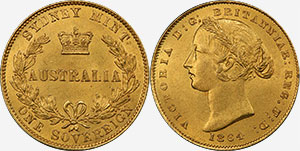 Stack's Bowers 1864 Sovereign this in August. Finest graded by PCGS.