Coins and Australia - The Minting Process - Articles on Australian coins

You are: Home » Australian coins » Articles » The Minting Process 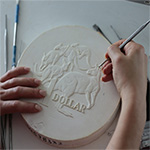 The minting process begins with an initial design brief. The Royal Australian Mint's product developers collaborate with the coin designers and engineers to create an image that will translate well onto a coin.

Once the design is approved, a three-dimensional model is sculpted using the most appropriate method, either traditional plaster modelling with tools, or 3D modelling software. The coin designer can spend many hours working on the model, refining the finest details to ensure the design can be manufactured to the highest quality.

Once finalized, the model is sent for cutting of a master tool and the manufacturing process begins. 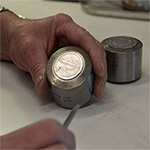 The coin design is cut directly into tool steel using a computer-controlled engraving machine, creating what is known as a reduction punch. This process takes up to 24 hours. The reduction punch contains a positive (raised or relief) impression of the complete design of the coin.

The reduction punch is placed in an hydraulic press. In a process known as hobbing, the design is transferred onto a softened steel block, using 100 to 400 tonnes of pressure. The result is a master die, containing a negative impression of the coin design. The master die is hardened, and is then used to hob another steel block. The result is a working hob, containing a positive impression of the design.

The third and last case of hobbing occurs when the working hob is hardened, and used to create the production die, which has a negative impression of the design. The production die is used to strike blanks, turning them into coins.

Proof coin dies get additional treatments so that they can transfer a high level of detail to the finished coins.

Sheets of metal have coin-shaped pieces cut from them. These are known as blanks, which will become coins once they are struck by dies. Blanks are usually round in shape, but an exception is the blank for Australia's 50 cent coin, which is dodecagonal (12 sided).

Blanks are rolled through a specially-shaped groove, which results in a raised edge. The raised metal assists in the coining operation by partially forming the rim so that the dies do not have to displace as much metal.

Blanks used for making proof coins undergo further treatment processes. Annealing, or controlled heating in a furnace, softens the proof blanks in preparation for striking. Pickling in a bath of hot acid cleans the blanks, and burnishing (spinning in a large drum with tiny ball bearings used as polishing material) smooths any surface blemishes. 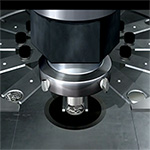 The Mint's Fitters and Machinists install the dies in the coin presses. Coin presses can be set up to make different denominations and may make several denominations on the same day. Blanks are fed through the presses, where they are struck on both sides simultaneously by dies. Dies can strike coins with up to 200 tonnes of pressure, at a rate of up to 650 pieces per minute. Under the pressure of striking, metal particles spread and stretch. This results in a sharper rim, and the edge of the coin taking on any serration in the press' collar. This is how coins get the grooves you often see around their edges. 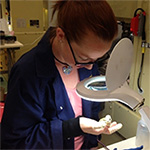 The uncirculated coin press has an automatic feed and can make up to 80 coins per minute or 20 000 coins per day.

Proof coins are made in presses which strike with 180-360 tonnes of pressure. Each proof press is manually operated, and the blanks are struck 4-6 times each. Each proof die can strike approximately 250 coins before it has to be replaced.

Uncirculated coins are inspected by staff members who monitor the production conveyor belt as coins leave the press. Any which do not meet standard are removed.

Proof coins are individually inspected by the press operator, using eyeglasses and magnifying lamps to check for any flaws. The tiniest imperfection will result in the operator placing the coin in a reject pile, whose contents will be sent to a foundry and melted down. 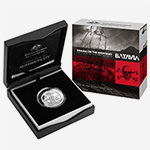 These large bags are packed into boxes. When full, these boxes are sealed and circulating coins are stored in the Mint's vaults until delivery trucks are ready to securely collect them and deliver them to banks.

Uncirculated and proof coins are individually packaged and delivered to the Royal Australian Mint's onsite shop, eShop or distributed to dealers who have commercial arrangements with the Mint.