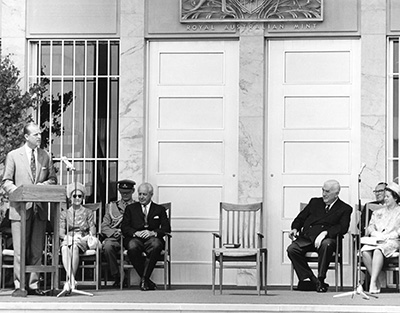 On Valentine's Day 1966, Australians woke to a brand-new currency.

The decision to change from the Australian pound (with its awkward shillings and pence) to a decimal currency – the Australian dollar – had been a pragmatic, economic one. Yet decimalisation became an opportunity for Australia to assert itself as an increasingly self-assured and forward-thinking country.

The conversion was also a major logistical and public relations triumph.

After almost 50 years, in terms of implementation of a government program, decimalisation remains arguably one of the most seamless and best executed reforms in Australia's history.

Foreign coins were common in the early years of the New South Wales colony. British coins circulated with Dutch guilders and ducats, Indian mohurs and rupees, and Portuguese johannas. But much of this coinage left the colony through trade with visiting merchant ships, posing a persistent problem to the colony's early governors.

In 1800, Governor Philip Gidley King tried unsuccessfully to fix the price of all foreign coins brought into New South Wales. Five years later, he even wrote to London suggesting that he be allowed to mint a decimal currency in Sydney:

As the issue of a circulating medium will in this case be made for the first time, it will be easy to arrange it on a decimal scale in order to induce the people in due time to keep their accounts in decimal numbers instead of pounds, shillings and pence.

In 1813, Governor Lachlan Macquarie bought 40,000 Spanish dollars (also known as pieces of eight) and had a round piece punched out of the middle of each one. The resulting coins were counter-stamped and became known as the holey dollar and the dump. This created a consistent monetary currency that, because it had no value overseas, stayed within the colony.

In the 1820s, Britain provided its Australian colonies with an adequate supply of British coins and legislated that these be the only recognised currency in Australia. The holey dollar was withdrawn as legal tender in 1829.

It wasn't until 1910, nine years after Federation, that Australia again created its own currency – the Australian pound. Even then, its coins were minted by branches of Britain's Royal Mint in Sydney, Melbourne and Perth.

It is interesting that it took Australia so long to make the switch to decimal currency. Various post-Federation Australian governments had considered decimalisation from as early as 1901, but they ultimately took their lead from Britain, which remained firmly against the idea.

It wasn't until the late 1950s that the Menzies government finally recognised the economic importance of converting Australia's currency to a new decimalised one, in keeping with those of many of its trading partners and the overwhelming majority of the world.

The argument for switching came down to a simple practical consideration. The Australian pound, like its British counterpart, was divided into 20 shillings of 12 pence each, making the arithmetic of financial transactions unnecessarily difficult.

This wasn't just a question of personal convenience but of national productivity. Research had shown that decimalisation would save the Australian economy more than £11 million a year, which would quickly offset the £30 million cost of conversion. 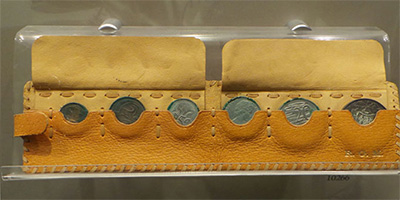 To date, the only compelling argument against decimalisation was the Australian pound's symbolic connection to Britain. But in the years following the Second World War, Australians were feeling less wedded to the mother country.

In the 1958 election campaign, Menzies promised to seriously consider decimalisation, but once in power did not exactly prioritise the issue. Treasurer Harold Holt appointed a Decimal Currency Committee in February 1959 to examine the merits of decimalisation but it took three years to report.

However, following the committee's recommendations, the government introduced the Currency Act 1963, which nominated 14 February 1966 as Changeover Day (or C-Day), followed by a two-year transition period during which both currencies would be legal tender.

Decimalisation gave Australia the opportunity to create an entirely new currency that, through its name and the design of its notes and coins, would reflect how the nation saw itself.

In June 1963, Menzies, ever the monarchist, rejected all of these in favour of the 'Royal'. However, this met with widespread public disapproval and three months later Holt announced that the new currency would be the dollar, divided into 100 cents. The public reaction to this was a lot more positive.

In the three months in 1963 when the 'Royal' looked like becoming Australia's new currency, the Reserve Bank produced a variety of designs for the notes. The example at left shows explorer Matthew Flinders and is similar in design to pre-decimal notes

Decimalisation presented major logistical challenges. Designs for notes and coins had to be finalised, staff in the finance sector had to be trained, and everything from cash registers to petrol pumps had to be converted.

It also demanded a major public awareness campaign that had to firstly convince the Australian public of the value of decimalisation then reassure them that the transition would be carried out as smoothly as possible. It also had to educate people about how to convert prices.

All of this was overseen by the Decimal Currency Board, headed by Sir Walter Scott whose regular appearances on national television offered reassurance about the technicalities of the change.

But the real poster boy for the board's publicity campaign was Dollar Bill, a cartoon figure that appeared in every conceivable media for the two years prior to C-Day. This included a TV advertisement called Dollar Bill and Australians Keep the Wheels of Industry Turning, which included the famous jingle sung to the tune of 'Click go the shears'. He also made regular appearances in newspaper comic strips and crosswords, booklets and brochures.

Decimalisation met with some resistance among sections of the public averse to change, but ultimately it was an easy sell for the board. People were given plenty of time to get used to the idea of decimalisation, every issue that would arise from the process was explained and addressed, and ultimately it was hard to argue against its merits. 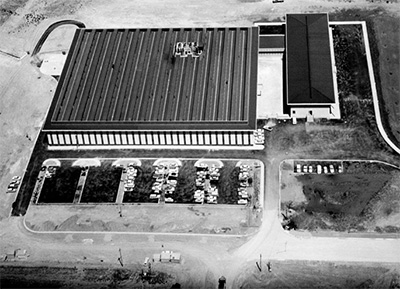 An important feature of the new currency was that its coins and notes would be entirely produced in Australia by Australian organisations.

The federal government had been printing notes since 1913 but to produce enough coins for decimalisation it was necessary to build an entirely new mint. The Royal Australian Mint in Canberra was decimalisation's greatest single expenditure. It opened a year ahead of C-Day and, with help from the Royal Mint in London and its branches in Australia, was able to produce and stockpile about one billion coins in good time.

When it came to the new currency's designs, it was decided that the coins should depict Australian wildlife while the notes should reflect our history and contribution to the wider world.

To make the transition easier for users, the decimal denominations matched their pound/shilling/pence counterparts – for instance, the $1 bill replaced the 10-shilling note. However, the overall look and feel of the notes was radically different to anything Australians had seen before.

It was a signal achievement that C-Day came and went with the minimum of inconvenience. Banks had closed four days earlier so they could convert their machinery and processes. In the preceding three months, hand-picked, well-armed police had escorted dozens of semi-trailers across the country, stocking the nation's banks with the new currency.

When banks opened on Monday 14 February, they were able to immediately begin issuing the new currency to long queues of enthusiastic or simply curious Australians. Newspapers reported that even the Decimal Currency Board was surprised by how smoothly things went.

The success of the conversion paved the way for metrification in the early 1970s, which simplified and modernised our weights and measures. Australia's decimalisation process was monitored by other countries such as New Zealand and Britain, which switched to decimal currency in 1967 and 1971 respectively.