Gold was first discovered in 1823 (near Bathurst) by James McBrien. Labourers and settlers alike left their farms, city dwellers abandoned their homes and jobs, and fortune hunters quickly began to flood in from Europe, the United States and the Orient. Gold was soon discovered at Clunes and then at Ballarat. The frenzied diggers swarmed back, quickly turning Victoria into the golden centre of Australia. Tensions quickly reached boiling point in the famous Eureka Stockade clash near Ballarat in 1854.

It soon became apparent that the gold was too difficult to use in it's raw state and on 9th January, 1852, a group of influential merchants approached Lieutenant-Governor Sir Henry Young to start up a mint to convert the gold dust to coin. Sir Henry, at first, refused point-blank, stating that coins could only be struck as part of the Royal prerogative.

The businessmen appealed again and Sir Henry sought the advice of George Tinline, the acting manager of the South Australian Banking Company. He was in favour of immediate action. They decided on a compromise when the Colonial Treasurer Robert Richard Torrens suggested that ingots and not coins be produced.

The ingots were not intended as general issue but for banks to hold as backing for their notes. The Act fixed the price of gold at £3-11s an ounce, 9 shillings more than was then being paid in the Victorian goldfields.

They were severely criticised from the word go. It was 4th March when the first ingot appeared and those who saw it were not impressed. They bore no resemblance to the ingots we know today. They were simply a flat strip of gold (some said flattened by a steam roller) which bore an official crown seal and punch figures showing the fineness of the gold which was roughly standardised at 23 and one eighth carats.

The weight of the ingot was also shown, as was a weight conversion to 22-carat gold. Both these figures were punched inside a circular stamp bearing the words 'Weight of Ingot'. They were irregular in shape, some being round and others rectangular, roughly measuring 50 x 25 mm. Many charged that the strips would be easy to counterfeit as the size was not standardised and even the colour of the gold varied - ingots with silver content were pale while gold ore containing copper had an orange tinge.

Thousands of these irregular ingots were produced. Most would not survive for more than a year or two. Today, less than dozen Adelaide ingots are thought to have survived.

Most known surviving ingots are in institutional collections except 2 that are in private hands: 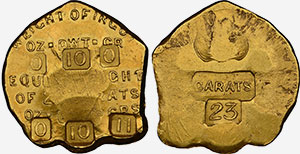 This Ingot was displayed in 2001 at the opening of the National Museum of Australia, Canberra, as part of an Exhibition of gold artefacts from around the world and at the Museum of Victoria.