You are: Home » Australian coins » Articles » Letter-shape variations in the reverse legend of George V pennies

Letter-shape variations in the reverse legend of George V pennies 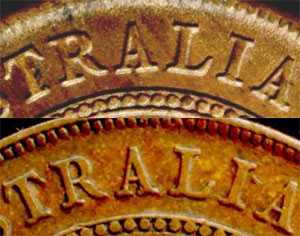 The following content comes from the Jon Saxton personnal website last updated in 2000, which not longer exist since around 2018. To keep this information available to the public and for a perpetuity reason, we reproduced it here.

In his little book, "The 1965 Australian Coin Varieties Catalogue", John Dean describes a particular variation on the reverses of Australian George V pennies. This variation affects shape of the letters forming the legend "COMMONWEALTH OF AUSTRALIA". On some coins the seriffed letters I, H, T, M, L , E, A and R have flat bases whereas on others the bases of the letters are distinctly concave. Dean also mentions this variation on the 1931 florin.

According to Dean's catalogue, the curved/flat-base lettering occurs in George V pennies as follows:

There seems to be a definite pattern here with the years 1919 to 1923 representing some sort of a transition period.

As a novice I have not (yet) read much Australian numismatic literature but it seems to me that this easily-discernable variation in lettering types has been ignored by numismatists, variety seekers and catalogue compilers alike. That struck me as odd, and still does.

Because of my interest in die varieties I had ordered back issues of some journals of the Australian Numismatic Society and the Numismatic Association of Australia, largely to read about Paul Holland's work in classifying penny and halfpenny varieties. I couldn't believe that Paul would ignore the subject and I was curious to see what he had to say.

At about the same time as I ordered the journals, I had been examining several George V florins under the microscope and I had noticed a similar variation of lettering styles. Reflecting on the similarity, I had formed a conjecture as to how the florin variety arose and wondered if it might apply to the pennies as well. My curiosity about Paul Holland's treatment of the subject was intensified. When the journals arrived early in January 2000, I was rewarded with the following observation (JANS 1993 page 16):

It should be noted that significant variations also occur in the shape of the lettering on the reverses of George V pennies. In John Dean's earlier work ... these were classified as "flat base letter" and "curved base letter" reverses. While some of these variations may have arisen during the striking of the coins, some are so pronounced and prevalent that it seems likely that they arose during some earlier stage in die production (i.e. at the level of hubs used to prepare working dies or from derivative master dies.)

Paul's remarks do not contradict my conjecture, and even go so far as to support them. If he had said much more, he would have given the explanation himself. Since he did not, I am emboldened to publish.

The aim of this document is to offer an answer to all of the following questions:

How did the different letter shapes arise?

It is the premise of this document that flat-base letters are the original form and that curved-base letters are a deviation which arose through differential plastic flow of metal under pressure. This premise will be examined in more detail later.

This is really a subject for more research. At the moment I offer the speculation that curved base lettering developed progressively during the production of derivative master dies.

Why is the 1931 florin the only one to show curved-base letters?

It isn't. In the preamble I hinted at the answer to this question. Although John Dean mentioned it only for the 1931 florin the variation can be observed on other florins. To be fair, the curvature on most florins is slight whereas on some of the '31 florins it is very pronounced:

Why is the variation confined to George V coins?

Curved-base lettering has only been documented (by John Dean) George V pennies (and the '31 florin). The lettering on the coins of George V is characterised by wide serifs so any curvature in the bases of those letters is clearly visible. Later issues have legends with sans-serif lettering so any curvature is less visible. Also, according to the conjecture set forth in this document, the serifs play an important role in the development of the curvature.

Why is the variation not observed in halfpennies and other coins?

If one accepts the differential plastic flow hypothesis (which is still to be explained) then one would expect curved-base letters to occur in a wide variety of coins rather than be confined to the pennies.

This expectation is confirmed by observation. If you look at a selection of pre-1940 halfpennies under a microscope, many of the coins are seen to have curved-base letters.

I have already mentioned that I had observed the curved/flat-base letter variants in florins and it was that observation which led me to this conjecture. Follow-up observations revealed that curved-base lettering and various similar deformations attributable to differential plastic flow can be seen in coins of all denominations, even threepences, throughout the entire pre-decimal era. Furthermore, the phenomenon is not confined to the reverse legends.

Other examples of curvature

Curvature on the tops of the letters on a 1938 threepence.

Curved-base lettering on a 1935 ½d obverse

When a coin is being struck, the flat metallic blank (planchet) is subjected to such high pressure that the metal behaves like a viscous liquid and metal flows from the field portions of the coin to the relief portions. This is the mechanism whereby the design cut on the surface of the die is transferred to the coin.

Just as an example, assume we're going to make a "coin" with an extremely simple design, like this: 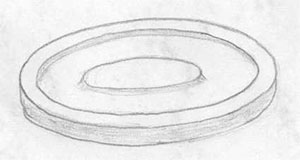 The next diagram shows, in cross-section, a pair of dies pressing a planchet. The arrows represent the flow of metal from the field portions to the relief portions of the coin during the strike. The flow is grossly exaggerated but I am attempting to illustrate how metal is squeezed from the field portions of a coin into the relief portions. (If I had the artistic skills I could produce an animated diagram but for the moment I have to inflict this one on you. Sorry.) 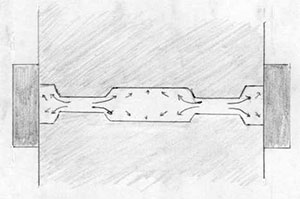 Real coins have more complex designs and in much lower relief but the principle is the same.

There is some observational evidence to suggest that such outward flow occurred during the minting of Australian pre-decimal coins. The evidence is most visible on high-grade silver coins but can also be seen on bronze issues and takes the form of radial strain lines running from relief features towards the rim, especially and most significantly rim-side of the legend.

The strain lines appear to be formed when the metal flows beneath the lettering while the metal forming the letters themselves is held in place by the die.

If the flow of metal from the field to the relief portions of a coin under the pressure of striking is combined with a general rimward flow of metal then the pattern of flow will vary according to the contours of the die. Let us examine what would happen to the metal in the foot of a serifed letter T such as found on George V coins.

The diagram below shows a cutaway portion of a coin featuring just the bottom part of the letter. The arrow represents the direction of metal flow (assuming that there is indeed such a flow). 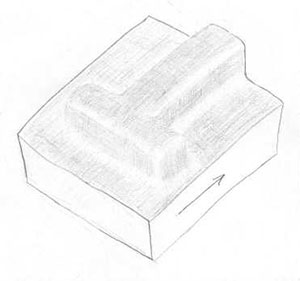 Imagine a cross-section through the serif of the T during coining when the die is in place and the metal flow is occurring. In region A the flow is unconstrained but in region B the metal has nowhere to go; it is held in place by the die. The result is a shear zone between regions A and B where the metal in A slips past the metal in region B. The surface metal in region C develops strain lines which can be seen under magnification. 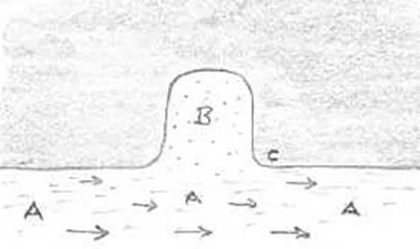 Now imagine a cross-section through the stem of the T. 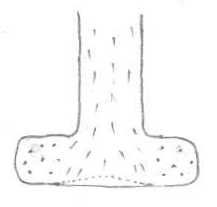 From the foregoing explanation, it would seem that the development of curved-base lettering occurs during coining. There are some difficulties with such a conclusion.

Firstly, it requires that there be an outward flow of metal during a strike. That can only happen if the blank is significantly smaller in diameter than the finished coin or if there are significant relief features around the edge of the coin to be filled by the strike. It is unlikely that small-diameter blanks were ever used; the rims would be obliterated during the early part of the strike and then have to be re-formed by plastic flow during the latter part of the strike. The only relief feature on the rim which needs to be formed is the beading and the volume of metal therein doesn't seem to be great enough to provide sufficient flow to induce much curvature in the letter bases. (That is a purely intuitive assessment and subject to correction.)

Secondly, it is not clear that the strain lines observed on high-grade coins were actually formed by plastic flow during the strike. Close examination of the strain lines suggests that they may really be imprints from the die!

Until now, this whole conjecture has been built on observation and on inferences drawn from observation but I have just made a completely unsubstantiated but pivotal statement and the remainder of this document must be treated as purely speculative until such time as I have had a chance to examine some of the dies and punches.

So what really happened?

The whole differential plastic flow conjecture hinges on the outward migration of metal during a strike. While there is probably some outward flow as rim beads are formed, it is (intuitively) unlikely that there would be sufficient flow to account for the degree of curvature exhibited in some coins (e.g. the 1931 florin shown earlier). Whereas some curvature may occur during a coining strike, it is likely that the principal cause lies elsewhere.

Dies are made from punches (hobs) in a hobbing press and punches are made from dies. Suppose you want to duplicate a master die. You use it to create a punch and then use the punch to create another die. This process is quite common and is frequently used to change the date on a coin. Take a 1933 punch, carefully shave off the last 3, make a new "193_" die and then hand-punch or engrave a 4 onto it to make a 1934 die.

What happens in a hobbing press is significantly different from what happens in a coining press. The pressure is greater (because the metal is steel rather than one of the softer coin alloys), the strike is very much slower, and there is no collar to prevent spreading.

The following diagrams are taken from page 163 of Cooper, Denis R., The Art and Craft of Coinmaking - A History of Minting Technology, (Spink & Son, London, 1988).

Fig 168 Stages in the hobbing of a working die. 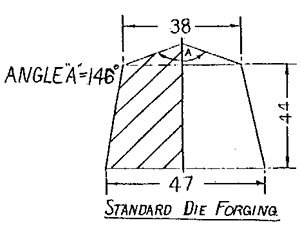 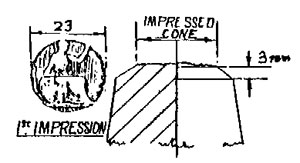 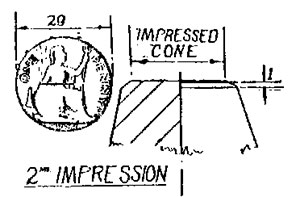 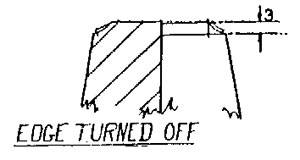 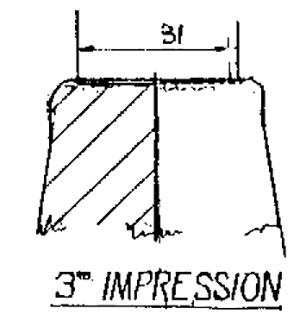 Now we come to the end of the matter. The pressing of a punch from a die is analagous to the striking of a coin except that there is ample opportunity for unconstrained radial plastic flow. In conjunction with the serifs and other limiting features, the opportunity for differential plastic flow arises, generating curvature of letter bases and similar deformations in the process.

The single most interesting thing to do now would be to inspect any applicable dies and punches to determine whether they show curved-base lettering. Another thing to check would be the existence or absence of strain lines near the periphery of the tool.

Another interesting study would be to try to correlate the curvature with die production but that is probably better left until after any inspection.

Should the dies and punches for a year in which the coins exhibit curved-base lettering show no evidence of such letter forms then it would strongly indicate that curvature arises during coining.